The key highlight of APOS 2013 was the induction of Raman Roy, Group Managing Director, Quatrro Global Services into the “Outsourcing Hall of Fame” – the most coveted award available to individuals working in the field of outsourcing. The award recognises outstanding individuals for their contributions to the management practice and outsourcing industry, and society at-large.

Top winners of the Outsourcing Malaysia Excellence Awards were selected after rigorous assessments and judging by independent and renowned leaders from across the globe. The winners include: 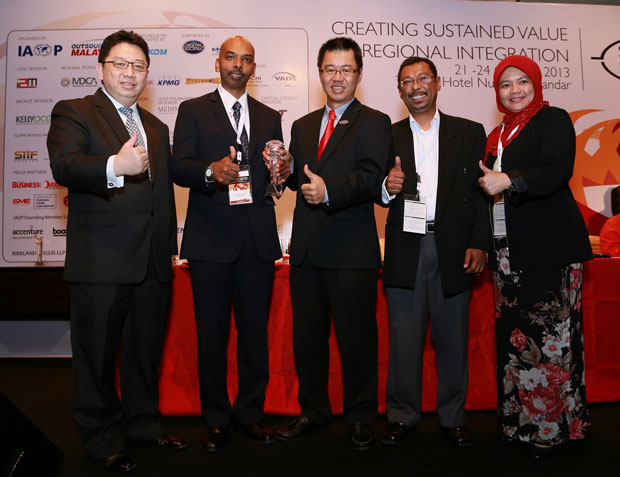 Meanwhile, Voon Seng Chuan, the ex-CEO of IBM, was named the ‘Outsourcing Leader of the Year’ for his contributions to the overall growth and development of the industry in Malaysia.

IAOP, in a strategic partnership with OM, hosted 300 delegates from 13 countries for APOS 2013 from October 21–23 2013 at Iskandar, Malaysia. Themed ‘Creating Sustained Value for Regional Integration’, the summit brought together the world’s top outsourcing practitioners and business leaders who shared valuable insights, imparted knowledge and experience over various forums, talks and networking sessions.

One of the key announcements at APOS 2013 was the unveiling of the outsourcing industry report entitled ‘Malaysia’s Global Services Outlook’, commissioned by OM.

Another highlight was the announcement of the development of Phase 1 of the ambitious MSC Cyberport City in Kulaijaya, Iskandar by MSC Cyberport Sdn Bhd, with a Gross Development Value (GDV) of RM626 million.