VADS Berhad recently welcomed a very special guest to its head office in Plaza VADS at Taman Tun Dr. Ismail. It was none other than its Chairman, Dato’ Sri Zam Isa who was there to officially open its new Showcase Centre at Level 5. Also present that day was other GLT members. At the event, Dato’ Sri and the rest of the guests were briefed on the new products and services offered by VADS and were taken on a tour of the various product & services that are showcased at the centre. This was followed with a Telepresence call to the PT VADS team in Jakarta. 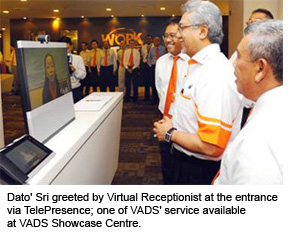 Also located at the same floor is a showcase of VADS world award winning call centre under its BPO offering where visitors get to see the day-to-day operations & set-up of a call centre. It also features other various products & services under its IT & Value Added Services offerings such as Managed Unified Communications, Managed WAN Accelerator and Managed Security Services.

For VADS Berhad, the official opening of its new Showcase Centre is indeed a great way to start the New Year!