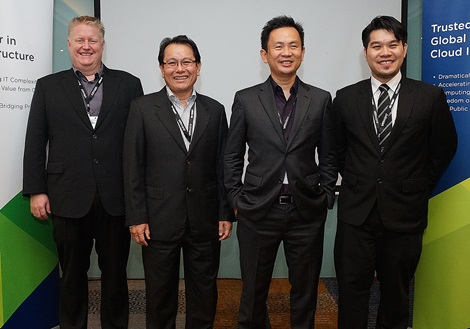 As more than half of businesses (57 percent) expect their organisations to be at least 60 percent virtualised by 2016, VMware Malaysia considers that the country has the potential to achieve its vision to become a developed digital economy by 2020.

According to the company’s latest survey, more than half of Malaysian businesses (57 percent) expect their organisations to be at least 60 percent virtualised by 2016

“I believe we will hit developed status by 2020; typically, Malaysia is typically three or years behind the rest of the world in technology adoption but we do catch up rapidly,” said Si. “Our adoption of social networking and mobile waves puts as among the leaders in the world. I think adoption will definitely put us in the developed category by 2020.”

“Companies at the end will invest in the software defined environment,” said Si. “Three or four years ago, conversations by companies centred on virtualisation. Today, we have almost 2000 customers at the symposium and they are looking at private clouds.”

“Three or four years ago, our symposium comprised conversations about compute,” he said. “Today, we are talking about how to evolve the virtualisation mind-set to include end user computing, storage, networking and moving beyond VDI to enterprise mobility, VMware is no longer a virtualisation company but an innovator in different areas, which includes software defined enterprise.

VMware’s survey, which polled 1,168 business and IT managers from September to October 2014, showed that 57 percent of respondents expected to be 60-90 percent virtualised within two years.

In a separate media briefing held on the side-lines of the symposium, Roger Ling, IDC Malaysia’s associate research director for ASEAN software & services, said, “Being able to better harness the value within the datacentre will become a critical business differentiator more than ever before.”

“The IDC Datacenter Economies Index clearly articulates how much value – US$1.36B worth of cost savings – has been driven into the markets through server virtualisation,” said Ling. “What organisations need to focus on is how these technologies can deliver greater business value.”

“Simply being able to virtualise some servers has a limited value, but when combined with a highly automated infrastructure, IT departments can deliver a degree of IT agility that the business has been demanding,” he added.

Ling said that Malaysia’s IT transformation steps from a cost centre to a centre of intelligence, security and agility also needed to be driven by a different CIO role. “Cost has been king, with savings being a primary driver in the last two decades. CIOs are having a lot of challenges to make transformation happen on the enterprise level.”

“Thirty-five [35] percent of CIOs in the region said their primary role is about delivering efficiency gains,” he said. “Saving to innovate is the emerging theme among CIOs in the region though. In Malaysia, the number one priority for CIOs is about addressing globalisation, and the IDC Transformative Index showed that CIOs are now seeing their role was about enabling business growth and automation.”

“Industry is transforming across the region as well as in Malaysia; consumption models are changing,” said Ling. “Everything as a service is the theme with investing in technologies to improve customer experience. The new business agile architecture works hand-in-hand with what VMware is working towards with in terms of software-defined data centres (SDDC) and software-defined enterprise (SDE).”

Matthew Hardman, VMware Singapore’s head of strategic business development, said that as Malaysian companies evolved beyond virtualisation, VMware was already working much more closely with other companies. “We want to build up a core area of applications as business is built on applications and is now the crux of IT.”

“This is now the central premise of everything we do: SDDC is about virtualising every aspect of the data centre and offering of it as service as software through different mechanisms,” said Hardman. “We want to give businesses the choice of where they want to go with their data (public, private or hybrid) in any combinations.”

VMware and Telekom Malaysia’s outsourcing services arm VADS deepened their association with the announcement that they would offer managed Desktop-as-a-Service (DaaS) and enterprise social networking solutions.

“CIOs are facing a challenge to protect their resources,” said Ahmad Azhar. “Though initially for larger customers, many Malaysian businesses will find that working with the Horizon platform has the benefit of security layers while their security concerns will also be taken care of.”

VMware Malaysia’s Si summarised that in the next two or three years “the Malaysian enterprise will go through disruptions that will reap positive benefits.”

“Aligned with the recent 2015 Budget initiatives, IT can play a pivotal role in enabling Malaysian businesses to be more agile and efficient,” he said. “Given the strong push for businesses in Malaysia to boost productivity on the back of pressures from high costs, deploying technologies supported by the SDDC will not only enhance resource efficiencies and cost savings but also enable businesses to leverage these technologies to automate processes and enable business growth.”

“The SDDC will help save Malaysian companies more than ÜS$1.36 billion from 2003 to 2020 and we want to enable IT to be more than just a cost centre to the business and become partners to help accelerate business growth in today’s changing world,” he said. – See more at: http://www.mis-asia.com/resource/data-center/towards-2020-in-malaysia-vmware-interview/#sthash.qYObGtEv.dpuf