VADS chief executive officer Ahmad Azhar Yahya said: “It’s a great achievement and reinforces our company’s strength as one of the best outsourcers in the country.
“One of VADS’ strength is the very close relationship it has with parent Telekom Malaysia Bhd (TM) as its information communication technology (ICT)/ business process outsourcing (BPO) arm.

“We work very closely with TM and leverage off its existing customer relationships by offering our additional services to them,” Azhar says.

The big push this year however is clearly cloud computing. While Azhar notes that the market awareness is high, market acceptance is low due to customer apprehension over its value and safety.

But this is clearly the direction VADS believes the market is heading to and the company has been an early player to make its presence felt in the market.

It is a syndication partner for Office 365 – Microsoft Corp’s cloud version of its Office productivity suite – and recently had a special offer where customers which subscribed to a six-month package were given an extra six months for free. 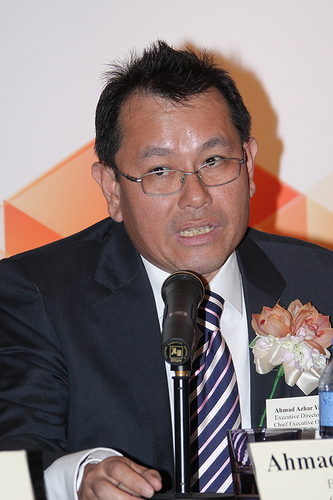 “The idea is to let them taste cloud services and we believe they will come back for more,” says Azhar (pic courtesy of Oracle Flickr stream).

It even, for the first time, became a sponsor for SME awards, Golden Bull, to create awareness among the small and medium sized enterprise segment of its offerings including its Cloud Clinics which serve to educate and inform customers of the opportunities they can exploit by adopting the pay-per-use model for their software needs.

“Our strategy is to offer the platform and partner with ISVs (independent software vendors) to carry their solutions and we then go to market together,” he says.

“We are an enabler and a marketplace. The idea is to keep populating our platform with more offerings so that it becomes a marketplace that offers customers a choice for whatever solution they are looking for,” he says.

Hence its recent partnership with the Technopreneur Association of Malaysia (TeAM) where TeAM members will market their solutions through the VADS platform with a revenue share arrangement with TM.

“There will be more such arrangements with other associations,” says Azhar.

The value of telepresence is clear. The cost savings from travel is the obvious one but Azhar also notes the productivity jump that comes from enhanced face-to-face communications.

VADS is now working to widen its telepresence reach by investing in a telepresence exchange that will link it to the networks of major service providers such as British Telecom (BT) and AT&T.

“This way, if any of our customers are in the United Kingdom, they can go to a BT telepresence site and use the facility to connect with their team in Malaysia,” says Azhar.

Interestingly, Azhar does not see improving broadband connectivity and the rise of desktop video messaging solutions such as Skype as a threat to his telepresence business.

“Quality is a major difference,” he says, claiming that telepresence offers a much stronger collaborative working experience.

With around 1,000 staff in Jakarta and Yogjakarta, its subsidiary PT VADS Indonesia itself is a heavy user of telepresence and has experienced its value first hand.

In fact, it has introduced a smaller version of telepresence called Telepresence Light which is targeted at medium sized companies and has had some success. The service is bundled with connectivity and is on a rental basis to lower the cost of use.

With most of its revenue still coming from ICT-type services and BPO, specifically in the contact center space, is VADS looking at Knowledge Process Outsourcing (KPO) as a potential market for the future?

Azhar acknowledges that KPO is about moving up the value chain, specializing in an area and having top quality engineers doing process management type work for customers. But he doubts the market is there in Malaysia for this service, “maybe outside of Malaysia, but we are keeping an eye on this space.”

For now and the near future, cloud services are the focus. “Our experience so far shows that the challenge is still to get customers past the initial hurdle in believing the cloud will help them with their business needs and with security concerns looming large in the minds of customers. But even for those who believe in its value, there are challenges.”

“I even had the CIO of a bank admit to me that while he believed in the proposition of the cloud, he does not want to be the first to try it and wants to see the experience of others first.”

Be that as it may, Azhar seems confident that the market will turn a corner, and when it does, he is positioning VADS to reap the benefits.

The company operates over 4,000 seats in 13 delivery sites in two countries (11 in Malaysia and two in Indonesia) and manages over 72 million customer interactions per year.