Telekom Malaysia Berhad (TM) today inked a Collaboration Agreement with Technopreneurs Association of Malaysia (TeAM) for its Go-To-Market initiative for TM’s BizApp Store. This collaboration also marks a key milestone for TM by bringing cloud services to Malaysian SMEs via collaboration with TeAM and supported by VADS’ platform.

Azizi A. Hadi, Executive Vice President, SME, TM signed the Agreement on behalf of TM while TeAM was represented by its President, Ir. Aziz Ismail. Witnessing the inking of the agreement were Mohamad Yusman Ammeran, General Manager, SME TM and Yusno Yunos, Council Member from TeAM. 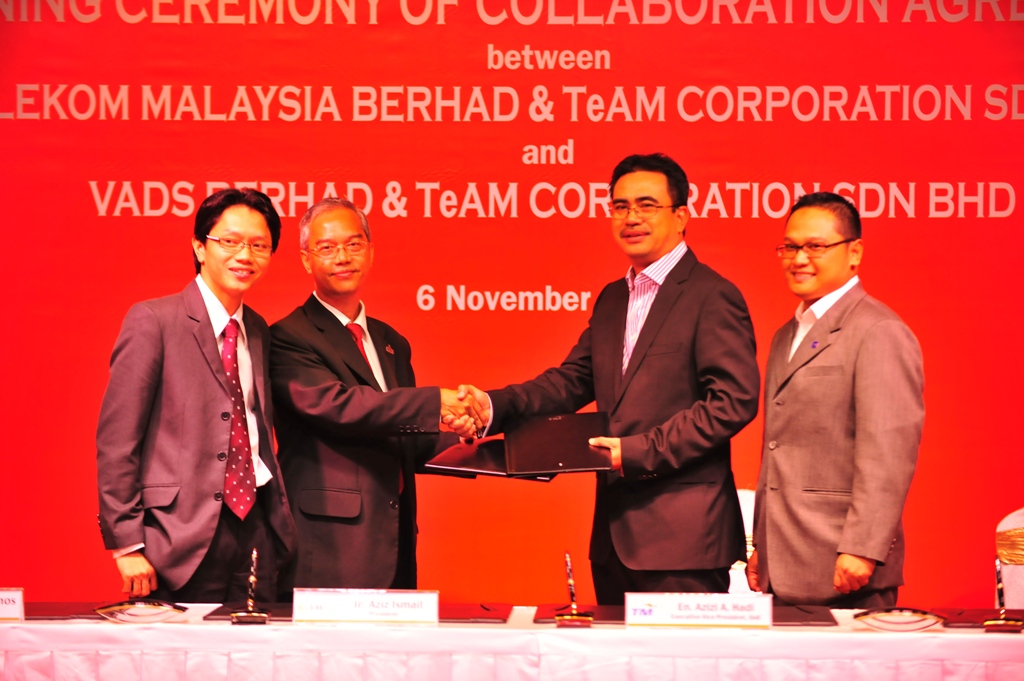 Ever dynamic, TM is currently the one-stop SME communications solutions provider, and aims to provide complete services and solutions to its customers with the recently launched TM BizApp Store. The TM BizApp Store is a self-service web portal that offers a wide range of business applications developed by international software companies and local Independent ISVs. All applications (apps) in the TM BizApp Store are industry-relevant for SMEs as they progress from a start-up phase to becoming a medium or large company.

This solution not only allows SMEs to get their applications up and running faster, but it also provides cost efficiencies, better management of IT resources and less maintenance for the SMEs. 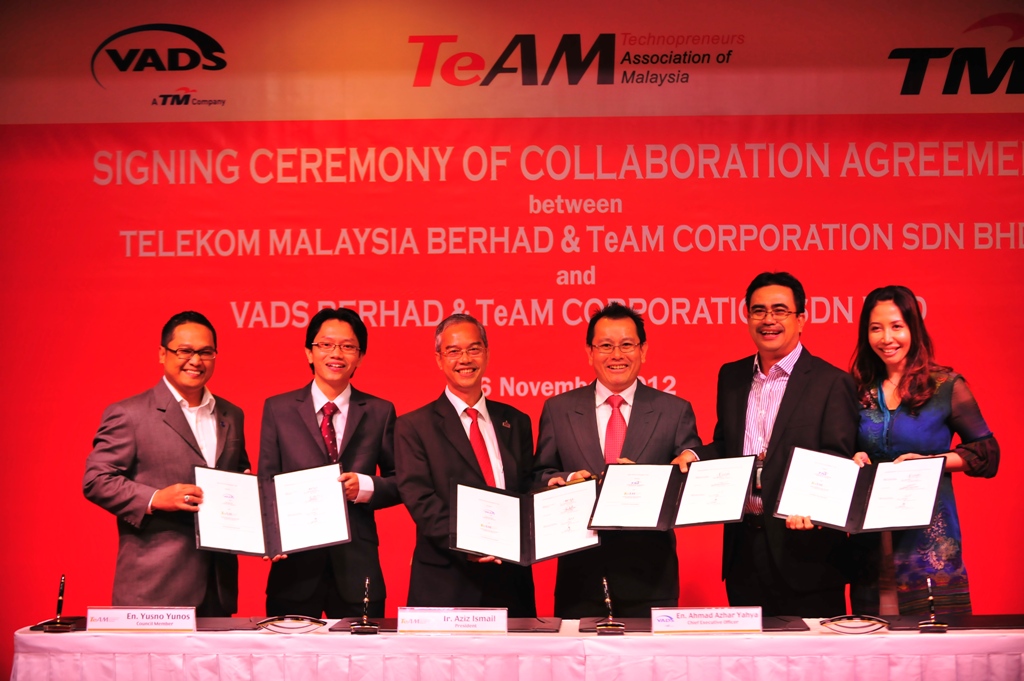 Commenting on the collaboration, Azizi shared, “With this agreement, TeAM members can now market and sell their cloud applications through TM’s BizApp Store; a one-stop centre software applications marketplace designed specifically for SME market. Both parties will be able to leverage and participate on each other’s joint-marketing and joint sales activities. Meanwhile TM is set to benefit from the trainings, demontrations and troubleshooting provided by TeAM’s ISVs to our personnel under this agreement.”

“TM also sees the collaboration as an avenue to increase broadband usage and accelerate ICT adoption amongst Malaysians,” added Azizi.

At the same event, VADS, represented by its Chief Executive Officer, Ahmad Azhar Yahya, also signed a separate Collaboration Agreement with TeAM to provide a cloud platform for TeAM’s ISVs.

“As a Cloud service provider, backed by TM’s extensive network, we provide one of the most comprehensive Cloud services in the country ranging from IaaS, PaaS and SaaS. In order to promote the adoption of Cloud services among the local ISVs, we have decided to enter into this partnership with TeAM, gaining access to approximately 400 local ISVs,” said Ahmad Azhar.

“Our collaboration with TeAM is based on reseller model whereby TeAM will be responsible to recruit its ISV members to come on-board the BizApp Store to promote their applications. At the same time, the ISVs can also utilise our IaaS and PaaS platform for testing and development. This is a win-win situation for both organisations as the local ISVs can have a platform to develop their applications while at the same time an avenue to promote their products,” he added.

“The cloud technology gives the edge where the CEOs can get access to their company information from anywhere they are at anytime they need it. The cloud provides them with advanced technology yet at very affordable cost. Their company become more effective and their staffs become more efficient and highly productive,” said Ir. Aziz.

“This is where the collaboration between TeAM and TM and VADS will play a big role in helping the SMEs in Malaysia. TeAM members understand the need of the SMEs and we provide the right kind of solutions to them. The Multimedia Super Corridor (MSC) initiative by the Malaysian government has created thousands of Technopreneurs in Malaysia,” continued Ir. Aziz.